Dogs and a kinder, gentler (and smarter) USPS 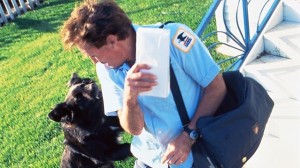 In their relationships with the United States Postal Service, dogs generally have the upper hand . . . er, paw.  Beyond the fact that postal employees frequently provide a tasty midday snack for their customers’ canines (see photo above), the USPS’s attitude toward four-legged fuzzballs has been surprisingly favorable.  Dogs have been featured frequently on stamps, some postal employees actually own and love dogs, and recently a new USPS program has helped to locate a lost Labrador in Stillwater, NY.

When Randi Slocum’s dog Kaylee ran away from her Stillwater, NY, home, Slocum and her friends did what any group of concerned pet owners would do — they formed a search party and knocked on neighbors’ doors looking for the chocolate Labrador mix.

But Randi’s mother, Carolyn, had a better idea — use Every Door Direct Mail (EDDM) to notify residents in Stillwater and nearby Schuylerville, NY, of the dog’s disappearance.

Carolyn Slocum, a board member of the local Postal Customer Council, had just attended an EDDM seminar given by Albany District Grow Your Business Coordinator Natalie Dolan. “I knew that the best way to reach every household was through the new EDDM program,” said Slocum. “Since many people work all day, this would be the most likely way to reach them.”

By the next morning, Carolyn had the mailings prepared to EDDM standards and dropped them off at the Stillwater and Schuylerville Post Offices. The flyer helped unleash a series of phone calls, and that helped lead to Kaylee’s safe return.

Long the poster child for government (or quasi-government) inefficiency, the USPS has in recent months introduced a couple of programs that are surprisingly sharp.  Every Door Direct Mail (EDDM) is simply not what you would expect from an agency know for volumes of arcane rules.  The postal service calls it a simplified mailing process, and it really is. Basically, EDDM makes it easy to send saturation mailings to reasonably small geographic areas without the need to purchase address lists. EDDM comes in two flavors – regular, for mailing service providers like Gralpharaphics Macon (name disguised to protect the delicate sensibilities of the franchise) and retail, for the DIYer.  The website (https://smp.usps.gov/) is functional and includes a cool mapping feature to allow the user to select by postal carrier route. 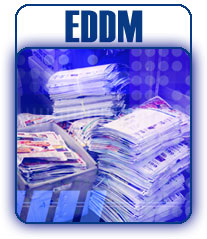 It is important to note that EDDM is the direct opposite of the targeted mailings that Poor Richard’s printshop has been promoting for some time.  EDDM is, in essence, a saturation mailing. No demographics selections are available and because the addressing is generic, it’s not possible to personalize the mailing or direct the recipient to a personalized URL (PURL).  The only select feature allows the sender to de-select business addresses and/or P.O. boxes.

Even with those limitations, EDDM will be great for service businesses and other small businesses that sell to a broad customer base and want to target specific neighborhoods to generate new business.   We are currently working on a saturation mailing in three neighborhoods for a startup lawn service business.  He’s chosen carrier routes where there are few apartment complexes and has eliminated business addresses.  The mailing will be around 1700 pieces, postage will be around $.15 each,  and most of the mailpieces will land at addresses that could conceivably benefit from his services.

On the other side of the mailing spectrum, the USPS has introduced a special discount to run in July and August 2011 to help promote “web-enabled” mailings.  This is another smart move that recognizes the value of cross-channel marketing and the integration of direct mail and internet.  First Class and Standard Mail letters that incorporate a QR or other mobile barcode will receive an additional 3% discount during July and August.  Details can be found on the  USPS website.

Both the US Postal Service and the printing industry as a whole have suffered greatly during the past almost 4 years of decession as cost cutting, business closures, and an accelerated shift to online communication have reduced volumes.  Poor Richard is hoping that the tide may turn again as marketers recognize the value of tangible print messages, especially in combination with impressions from other channels.  It is refreshing to see the USPS taking some intelligent direct action to encourage the use of both direct mail and cross channel efforts.  Want to try any of this out?  Call me or stop by the printshop behind the red awnings on Poplar Street. Bring your dog.